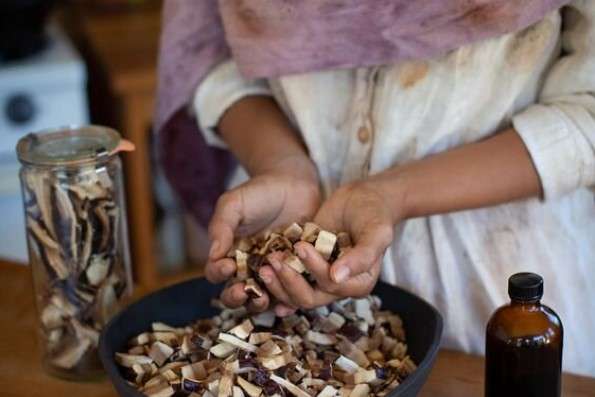 Buzz word alert. You’ve probably heard this word at least 400 times in the past 30 days, especially with the rise of COVID19. But what does it really mean?

Simply put, adaptogens work by helping the body adapt to change. They work in a non-specific way to boost resistance from outside stressors- including radiation, toxicity, and other pathogens. They promote homeostasis of the body by regulating chemical changes, whether physical, chemical, or biological.

The best way of thinking about adaptogens is to go back to their original habitat. These plants have endured the elements, and had to adapt to outside stressors themselves, making them innately intelligent.

Ayurveda, an eastern science of life that focuses on elemental healing, is one of the more popularized modalities to use adaptogens to help bring the body and spirit back into balance. Chinese medicine has also been using adaptogens for centuries. So although these remedies are ancient and have been passed down through tradition for many many years, there still aren’t many modern day scientific studies on their effectiveness. We urge you to try them for yourselves, since experience is the only true way to know if they’re working for you. Below are some of our favourite underrated adaptogens, described with a combinations of scientific and folk medicine concepts.

This herb is one that actually has quite a few studies done on it. Most research supports using Tulsi for it’s therapeutic value. The nutritional value is also high, as it contains:

“As the name would imply, holy basil has spiritual as well as medicinal significance in Ayurveda. In Hindu mythology, the plant is an incarnation of the goddess Tulsi, offering divine protection. Many Indian families keep a living holy basil plant in their homes, and tend to it with great care and reverence. The plant’s woody stalks are often made into beads used in meditation malas or rosaries.”

Not only does it help us cope with anxiety and protection, but tulsi has oils in it that protect cells from toxicity of radiation and chemotherapy. It’s also been shown to help people with everything from asthma, to headaches, to kidney stones, and lung disorders.

We’re put this powerful adaptogen in our PMS blend to help lift mood and iron levels for those who are menstruating.

In Chinese Medicine, Astragalus is said to help tonify the organs and raise your vital life force energy (Qi) against gravity. This is helpful for many things including immune-boosting, anti-aging and anti-inflammatory effects

Astragalus is believed to prolong life and used to treat a wide variety of ailments, such as fatigue, allergies and the common cold. It’s also used against heart disease, diabetes and other conditions. This root is also high in minerals and vitamins like:

Astragalus is often promoted for its effects on the immune system, liver, and cardiovascular system. It is thought to stimulate the immune system and provide antioxidant effects that inhibit free radical production. In the body, free radicals damage cells and are linked to many health problems associated with aging.

We put it in our HEAL blend to help the immune system become stronger while aiding the respiratory system in times of illness.

Need a brain boost? Ginkgo could help! Used for centuries in traditional Chinese medicine, ginkgo biloba supports memory and cognitive function thanks to specific flavonoids and terpenoids (antioxidant rich properties). These antioxidants have been studied for their potential benefit to mood, and their ability to slow oxidative stress.

It has long been known that ginkgo biloba increases blood flow to the brain. Beyond  ginkgo’s traditional uses newer research is showing that ginkgo may have a role in managing blood lipids and blood sugar as well. Traditionally it’s been used to treat many things, including:

We put gingko biloba in our WOKE tea blend to help keep the mind focused and clear brain fog.

We hope this article has helped clear up some of the misconceptions about adaptogens & has inspired you to do your own research on which plants are best for you!

Thank you we will be in touch with you shortly.

We are so grateful for our community of plant lovin’ supporters ♡